Always keep 100% of your Compensation

How to sue your GP for negligence

You sue your doctor for negligence by contacting a medical negligence solicitor. Ideally, you should find a law firm with a GP as part of their team. The Medical Negligence Team has a GP as a full-time staff member, and their experience is priceless.

You want a quick resolution to the GP negligence case so you can get on with your life. The Medical Negligence Team settles cases quickly obtaining GP negligence compensation for their clients. 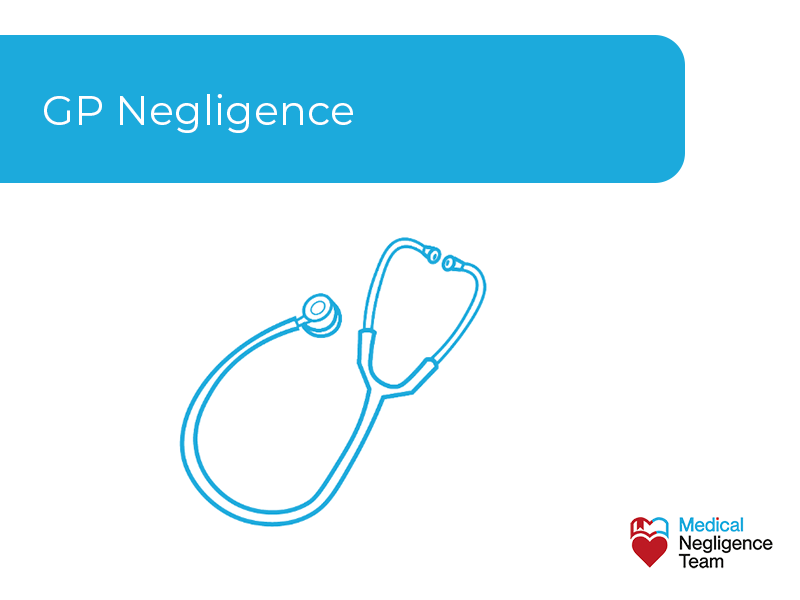 Why sue my GP for negligence?

You sue your GP for negligence because they made a mistake, and you suffered an injury because of that mistake. You should not have to suffer for their negligence and deserve compensation for what happened.

We trust our GP always to give us top quality medical treatment. What we do not expect is GP negligence that may affect us or a loved one for life.

It costs money to fix a medical error.

The compensation you get from your GP negligence claim will pay for the medical treatment and care you need to fix the problem.

What is GP Negligence?

GP negligence is when your doctor gives you medical treatment below the standard expected of a medical professional. The GP’s negligence causes you injury or severe illness, which would have been avoided if they did their job properly.

If you have been a victim of any form of medical negligence? We specialise in pursuing damages against negligent healthcare providers.

It’s free and easy to speak with one of our team of medical negligence professionals.

Speak with one of our medical negligence experts

3 Reasons We’re The Best Choice For Your Case:

What do you need for a successful GP negligence claim?

For a successful GP negligence claim, you need to show Breach of duty Causing injury. This is known as the BC of GP negligence.

The Breach of duty is the GP’s negligence, and you can sue your GP for that negligence Causing injury.

Some common types of GP negligence

Some common types of GP negligence appear in compensation claim cases over and over again. Unfortunately, doctors make the same negligent mistakes, and patients continue to suffer.

A look at a few types of GP negligence shows how easily it happens and how it can affect your life.

Types of GP negligence include: 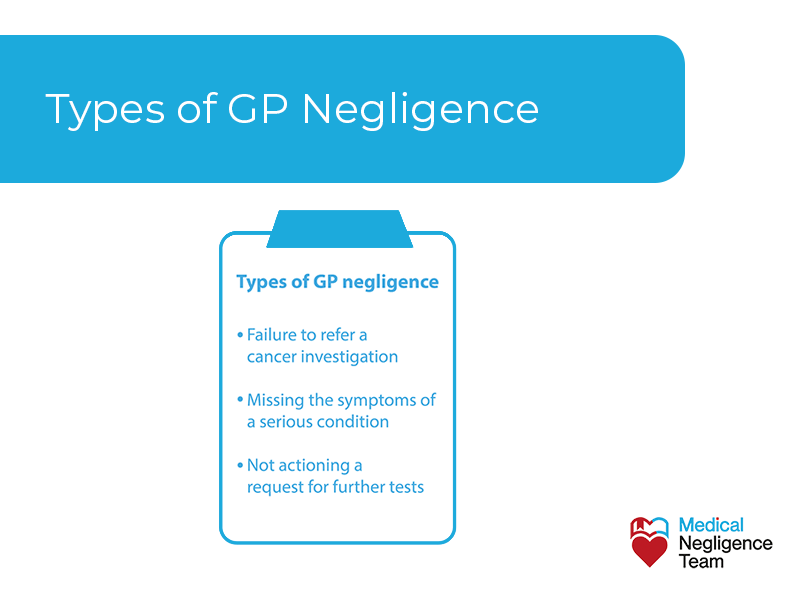 Failure to refer a cancer investigation

The clear NICE guidelines for cancer state when a GP should refer a patient onto the fast track, two-week wait for further investigation.

If a GP does not follow those guidelines and your cancer develops, then you can sue your GP for negligence.

NICE guidelines for bowel cancer indicate when a GP should refer anyone for the two-week wait. Referral should happen when they meet one of the following criteria:

NICE guidelines for skin cancer indicate that your GP should refer you with a score of seven or more on the following weighted, seven-point checklist.

Major features of the lesions (scoring 2 points each):

Minor features of the lesions (scoring 1 point each):

When your GP does not follow the NICE cancer guidelines and cancer develops, then you can sue your GP for negligence.

Missing the symptoms of a serious condition

Missing the symptoms of a serious condition can only make the disease worse. Your condition will not improve without treatment, and early diagnosis is key to a good outcome with any disease.

Your GP may miss symptoms of meningitis, appendicitis, sepsis or necrotising fasciitis and many other diseases they should recognise. Often a condition is not spotted until you are seriously ill and are rushed to A&E.

Negligence in missing the symptoms of a condition lies behind many GP negligence compensation claims. 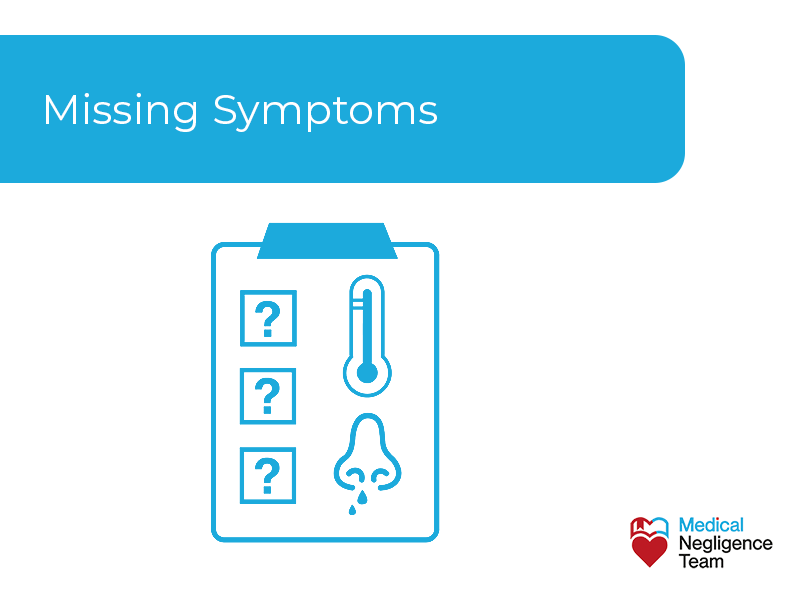 Not actioning a request for further tests

If your GP does not action that request due to forgetting or being too busy, it can seriously affect your health. Instead of being investigated for renal cancer, they send you home, and your condition gets worse

When you are diagnosed with advanced renal cancer, you will ask why it was missed earlier. You would have to consider suing your GP, if their negligence delayed diagnosis and treatment for your cancer.

Speak with one of our medical negligence experts

3 Reasons We’re The Best Choice For Your Case:

The steps to follow when suing your doctor for negligence

The steps to follow when suing your doctor for negligence are easy to manage. When you know what you are doing and how to do it, your GP negligence case will go quickly.

Seek medical advice as soon as you realise you have suffered GP negligence. A  medical professional will listen to your complaint, do a medical examination and confirm what needs to be done to seek to catch up with the delay in treatment. 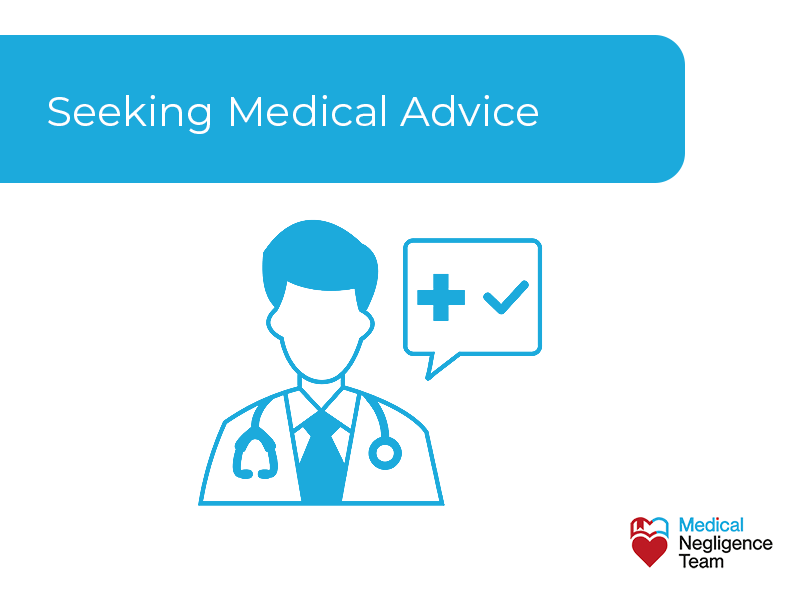 Always employ a No Win No Fee medical negligence solicitor who will not charge you in case of an unsuccessful claim.

At Medical Negligence Team we operate a No Win No Fee policy. We also have a 100% Compensation Guarantee scheme where you keep every penny of your compensation. 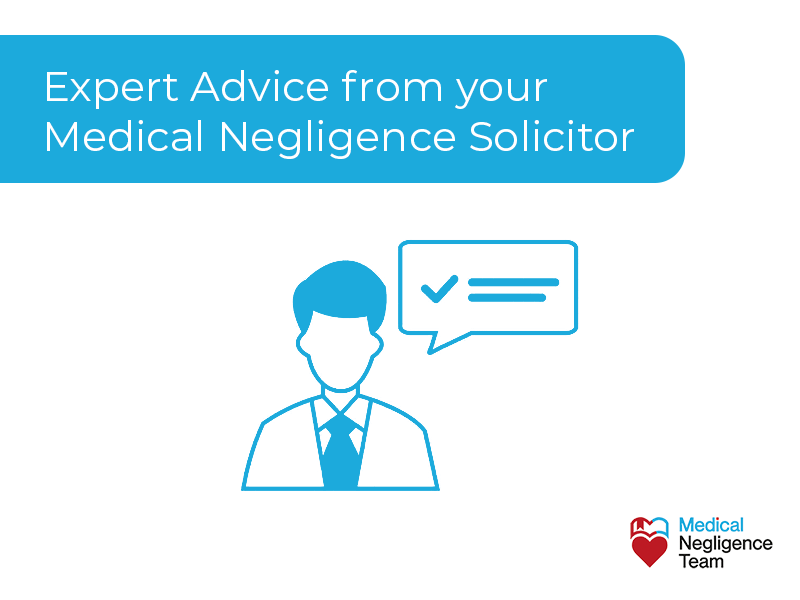 Obtaining GP records where a loved one has passed away was a complex process. Previously, an application had to be made to Primary Care Support England. A medical professional would then have to review and redact documents before they could be released.

Thankfully since 1 April 2022, this process has now stopped, and the records can be obtained from the GP practice.

When your solicitor identifies clear negligence by your GP, they can sue your GP for compensation for you or a loved one. 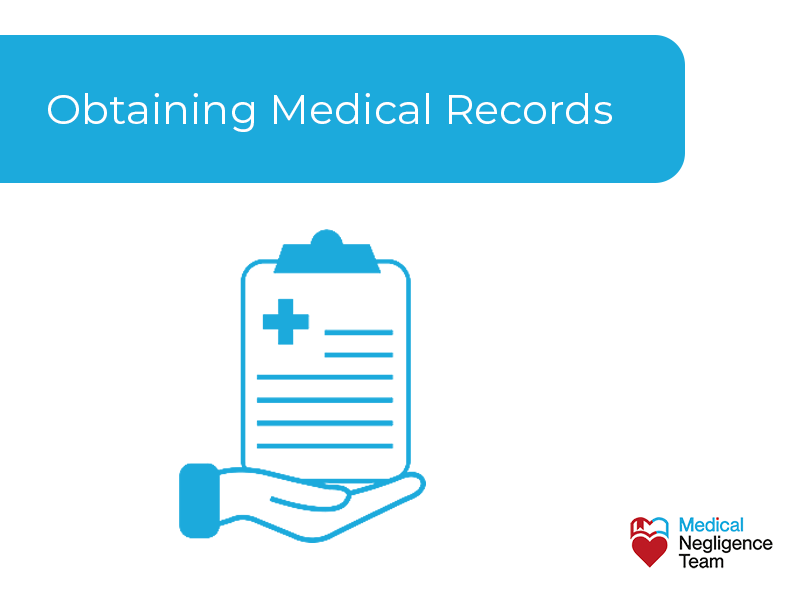 Step 4: Sending a letter of claim

Sending a letter of claim is the next step when your medical records show you have a sustainable GP negligence claim. Your solicitor will write to the negligent party outlining your claim and request an answer admitting the negligence.

Once your GP receives this letter, they have, via NHS Resolution, four months to respond to it. 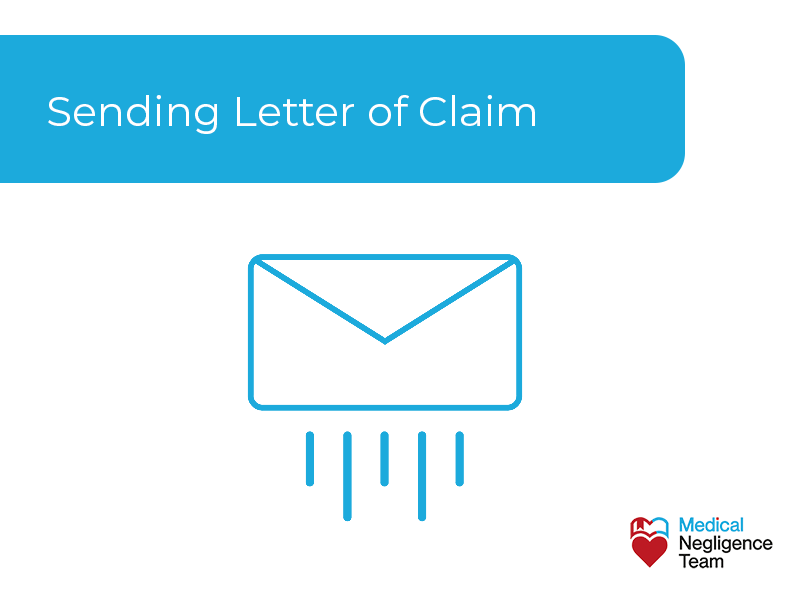 Step 5: Getting a response from the GP

Getting a response from the GP should happen within the mandatory four months. If GP negligence is admitted, your GP negligence claim can be valued and settled.

If the GP denies liability, your solicitor will consider issuing court proceedings.

Issuing court proceedings happens when your GP’s solicitor denies liability for the negligence. It can happen too if the offer of compensation is below that due to you for the GP negligence which occurred.

Your solicitor will advise you on what to accept and issues any court proceedings for you.

People often worry whether they will have to attend court to give evidence but less than 1% of all GP negligence cases end up in court.

At Medical Negligence Team we use our experience to sue for a quick resolution to all cases.

How long will it take to sue my GP for negligence?

It can take nine to 18 months to sue your GP for negligence. If negligence is readily admitted on behalf of the GP by NHS Resolution, your case can be quickly settled.

The Medical Negligence Team is fast and aims to settle cases as quickly as possible in your favour for full 100% compensation.

It is important to remember that your solicitor can only finalise the valuation of your GP negligence claim when your future condition and medical prognosis are known.

In these cases, where the GP negligence is accepted, but the final valuation cannot be immediately reached, your medical negligence solicitor can request interim damages payments.

The interim payments are deducted from the final settlement figure.

Are you eligible for compensation?

If you want to obtain compensation for the negligence you have suffered, we have a simple 3 step process to make sure you get the money you deserve

All case reviews are 100% cost and commitment free.

How much can I claim for GP negligence?

You can claim from £1,000 to more than £1M when you sue a GP for negligence. As in any compensation process, the amounts vary depending on how serious the GP negligence is.

When you sue a GP for negligence, you seek compensation for general damages and special damages.

General damages are for injury as a direct result of medical negligence, such as pain, suffering and illness

A general damages claim can vary from £1,000 to £2,000 for a medication error which caused three to five weeks of pain and suffering.

A missed diagnosis may lead to higher amounts, of more than £400,000 being awarded for general damages if limbs were lost as a result of a delay in diagnosis of meningitis then special damages would be added on top of that figure.

Special damages are included in a compensation award for GP negligence where there is a need for long-term care or a loss in future earnings.

An example would be where a GP misses a meningitis or sepsis diagnosis. If you lose both limbs above the knee, as a result, the special damages compensation would typically run into millions.

The compensation is for the loss of limbs, but most of the payment would be for future care costs, the need for home and vehicle adaptions and prosthetic limbs, and the loss of salary.

Have you experienced negligence from a GP recently?

We offer a speedy and successful service to win your case. Contact us today for all your medical negligence needs. 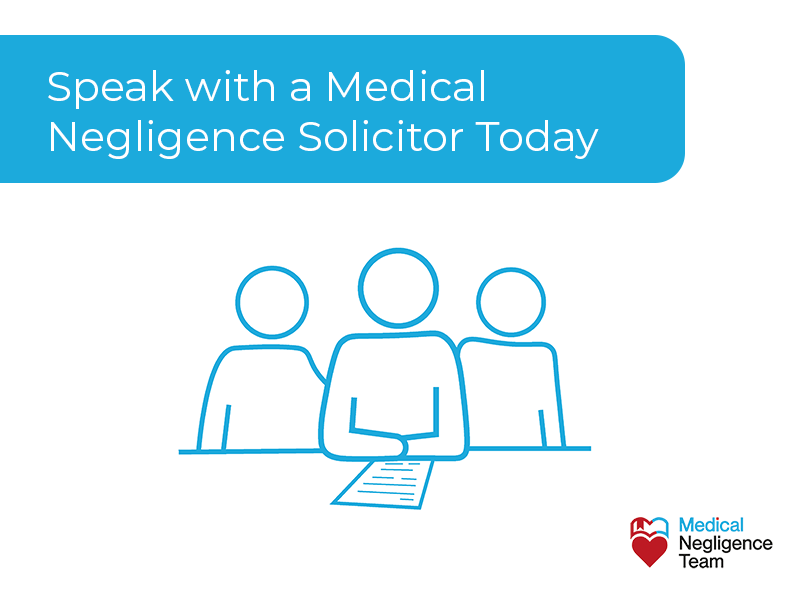 No Win No Fee

If your claim wins our costs are paid by the negligent party so you get paid 100% of the compensation recovered.

Our Dr Anthony Barton edits the leading book “Clinical Negligence”. Anthony and his wife Penelope (a GP) have a combined sixty years of medical and legal experience.

Are you eligible for
compensation?

Take our 5-minute compensation questionnaire & get your claim assessed within 24 hours.

Our team members have a higher career win rate with a 75% success rate on NHS letters of claim, compared to an industry average of 54.5%.